Notes, references and codes I wrote while reading and coding along Architecture Patterns with Python by Harry Percival, Bob Gregory - O’Reilly.

My code along repository bmaingret/architecture-patterns-code-along.

The full code by the authors is also available, as well as their book at github.com/cosmicpython.

Diving in the domain model

any domain object that is uniquely identified by the data it holds; we usually make them immutable

Which in Python can easily be converted to frozen dataclasses, offering hash for free.

Note however than because SQLAlchemy modifies the class at runtime, we have to use unsafe_hash=True instead…

Domain object that has long-lived identity

Usually mutable and have a fixed identity not depending on their values.

We usually make this explicit in code by implementing equality operators on entities:

In Python that means defining the __eq__ operator.

Careful when defining hash, which basically means identifying what uniquely defines an entity along its life.

Not everything must be in a class

Domain Service Function: in Python we can put the function in the module without making it more than that.

Business errors/exceptions can be nicely represented by exceptions

Make an abstraction around the storage. Looks like everything is stored in-memory and allows for

ORM can lead to high dependency towards the ORM framework, and one must be careful to invert the dependency and makes the ORM depends on the domain models instead.

Although I had read a lot and knew this was the way to go, I never took the time to implement it in any of my project, so I thought this would be a good opportunity, even more since the original authors take this path as well (Makefile and Docker).

I had so much trouble making everything work under plain Windows, that I moved all my Python dev to WSL2.

I had learned of Poetry a year ago, but still stuck to Conda. I never liked the Conda way of handling dependencies, but it is still of great help to install some data science tools that are not pure Python.

Github Actions are a recent (and welcome) addition to Github, allowing CI/CD workflow right in Github. Although it is possible to stay in the Github ecosystem, some Actions still depends on external tools and API.

To get a good starting example, one can go to the Actions tab in a github repository, and at the Choose a workflow template select Skip this and set up a workflow yourself, an editable configuration template will be made available right from the browser.

For this repository, I have a single workflow containing the test passing, test coverage, linting and formatting. The Python setup is done thanks to an available Github Actions, dependency install thanks to Poetry, coverage through pytest-cov and codecov, and finally linting/formatting thanks to pre-commit.ci. More on that in next part on pre-commits.

Instead (or in addition) of automating code quality checks before merging, we can take part of the git hook to check these before even committing. Thanks to some good people, we have an awesome Python tool for that: pre-commit.com. Once installed, configuration can be made through a .pre-commit-config.yml file and then installed with pre-commit install. Once installed you can see the generated Python script file .git/hooks/pre-commit.

To configure hooks with pre-commit, you need to specify git repositories. Several hooks are available at the pre-commit repository, among which I configured:

To this I added Flake8 a Python linter, and black a code formatter (this will modify your code, although you can make it not, but that would go against the point).

Note that thanks to pre-commit.ci, the same configuration file can be used both to install the hooks locally, and to run checks in a Github Action.

This usually allows to do edge-to-edge testing, faking some details (quite often I/O). This requires some additional abstractions (around the filesystem for instance) and new explicit dependencies on this abstractions).

Also called an orchestration layer or a use-case layer.

Although the concept of service is interesting, this chapter leaves things in a dubious state with still a lot of coupling towards the ORM from both the Flask app and services, the low details of domain implementations are everywhere, and testing is getting more and more difficult to init properly.

To reduce coupling with domain models:

I’ll just copy/paste from the book here for rules of thumb regarding tests to implement:

Services and API are still tightly coupled with the data persistency and session management. Unit of Work define a single entry point for data storage, allowing to nicely handle transactions (commits, rollbacks, failures, etc). It also eases the integration between the service and the repository layers.

In Python, it fits very well the context manager type.

Invariants are conditions that are always true.

Constraints are rules that restricts the possible states of the model

In order to ensure invariants and constraints, and in addition of the logic behind, we need to ensure the data integrity, especially in concurrent operations. While we could lock the entire table/database we are manipulating this won’t scale up. The aggregate pattern groups up several domain objects in a container and allow to manipulate them as a single entity, thus ensuring data integrity and consistency of everything in it (the actual implementation will ensure it, not the simple use of the aggregate pattern).

The choice of aggregates is not simple and depends of the constraints of each project. Keep in mind that the less data in the domain models, the easiest it is to ensure invariants and constraints. 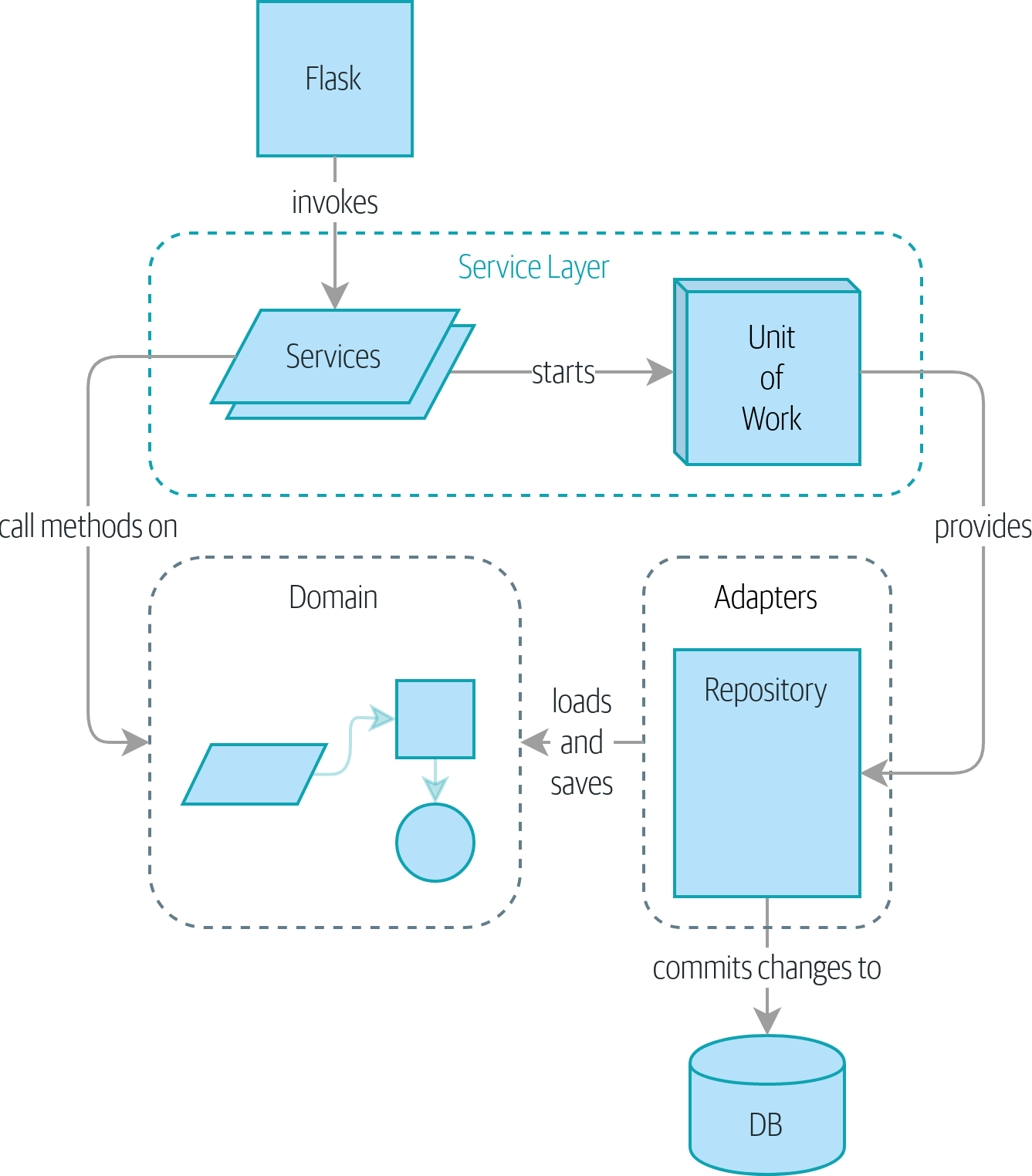 Optimistic concurrency: suppose things work fine most of the time

Note: there is a lot a db specific way of implementing locking at different levels (consistent read, select for update, etc.)

Chapter 8 - Events and the Message Bus

Events help to enforce the Single Responsibility Principle (the S of SOLID), preventing having multiple use cases tangled in a single place.

Events can be raised and handled at different places: 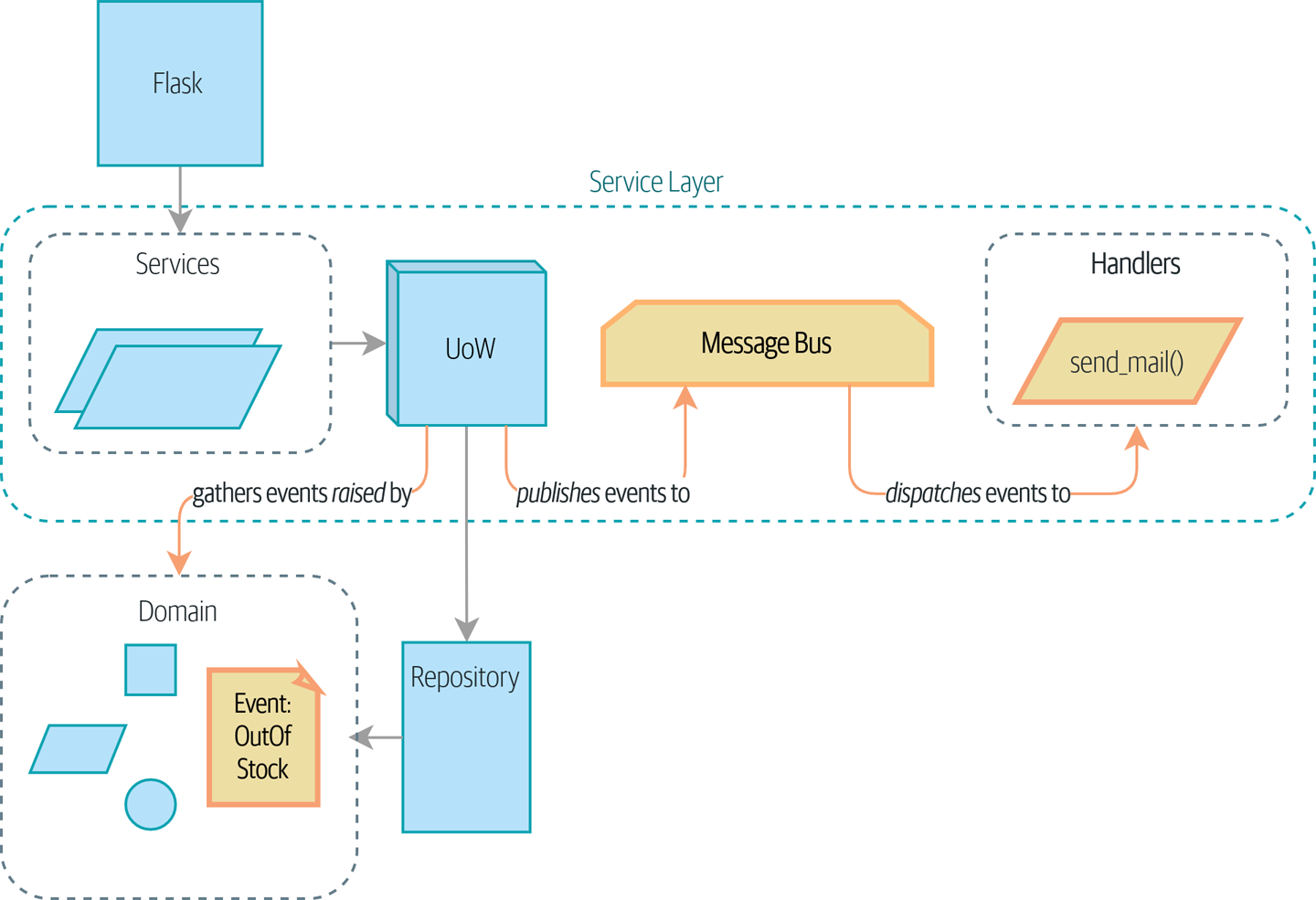 Chapter 9 - Going to Town on the Message Bus

Using the message bus as an entry point for the service layer.

Service functions become event handlers, and as such all internal and external actions are managed the same way, through event handlers.

When large changes are incoming adopt

follow the Preparatory Refactoring workflow, aka “Make the change easy; then make the easy change”